One of the hidden gems for calm-water kayak paddling in the heart of our Nation’s Capital lies between the Pentagon on the Virginia side of the Potomac River and the Tidal Basin on the DC side. There is a small, narrow island named Columbia Island that is home to both the Columbia Island Marina and Lady Bird Johnson Park.

The Marina is a year-round facility that provides moorings for over 200 boats and launch facilities for easy access to the Potomac River. Kayak and SUP launching is free, and there is ample parking nearby for vehicles once you have unloaded your boats.

This has become one of our favorite spots in the entire DC area to paddle. Once you launch from the Marina, you have 2 choices for your route, heading north for quick access to the Potomac River, or heading south along the farro cut that forms Columbia Island. The cut extends for about 2 miles and you pass under bridges that provide vehicle traffic to Arlington National Cemetery and along the George Washington Parkway.

Once you exit the cut, you will see Theodore Roosevelt Island, a National Park Service property that includes a beautiful memorial to the nation’s 26th president. You can now choose to head left (south) towards Key bBridge, and circumvent Roosevelt Island, or for a shorter paddle, head right (north) to pass under Memorial Bridge and back to the Marina.

Our most recent paddle

In keeping with our tradition of attempting to paddle at least one time in every month of the year, we took advantage of an unseasonably warm day in the middle of January to extend our streak. Up until the 14th of the month, there wasn’t a day we were free to paddle that topped 40 degrees, but on the 15th, it climbed into the mid-60′s, so we took a few hours of vacation time on a Friday and headed to Columbia Island Marina.

Wildlife abounds amongst the bustle of Northern Virginia 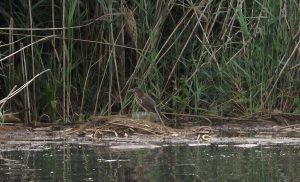 Even in the dead of winter, we encountered a green heron (photo above), noisy kingfishers, hooded mergansers, hundreds of geese and most unusually, 5 turtles! This is the first time we have seen turtles in the winter months, albeit they were moving very slowly.

Just before the end of the paddle and right across from the Pentagon, we flushed an adolescent eagle, and he (she) graced us with a few soaring circles before heading off to another location. All in all, another terrific paddle!

About the Author: Steve Smolinksi