In December, we headed south to Florida to visit family and get a few kayak paddles in during the colder months up north. Our first stop was in Cocoa Beach, just south of Cape Canaveral, and we paddled in the Merritt Island Wildlife Refuge a couple of times. The Refuge is amazing; 140,000 acres of marshland, saltwater estuaries, coastal dunes and mangrove mazes.

The Refuge was developed as an outgrowth of the nation’s Space Program. In 1962, NASA acquired a large tract of land, water, and marshes next to Cape Canaveral to establish the John F. Kennedy Space Center. NASA built the launch complex and other space-related facilities, but there were still over 100,000 acres that were undeveloped. In 1963 the U.S. Fish and Wildlife Service established the Merritt Island National Wildlife Refuge, and in 1975 they established the Canaveral National Seashore. The combined Wildlife Refuge and National Seashore are now managed by the Department of the Interior.

On one of our paddles, we enlisted a guide from A Day Away Kayak Expeditions and went on a sunset/moonrise tour 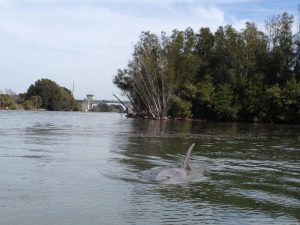 We were treated to an up-close dolphin encounter, a protected bird rookery island (with over 2,000 birds (white and brown pelicans (white pelicans are twice as large), great blue, little blue and tri-color herons, roseate spoonbills, ospreys, cormorants, white and glossy ibis (they call ibis Florida chickens here)), and many other species. After sunset, we cruised through a mangrove maze with comb jellies in the water that glowed with bioluminescence when you disturbed them.

All in all, a fantastic three hour paddle!

About the Author: Steve Smolinksi